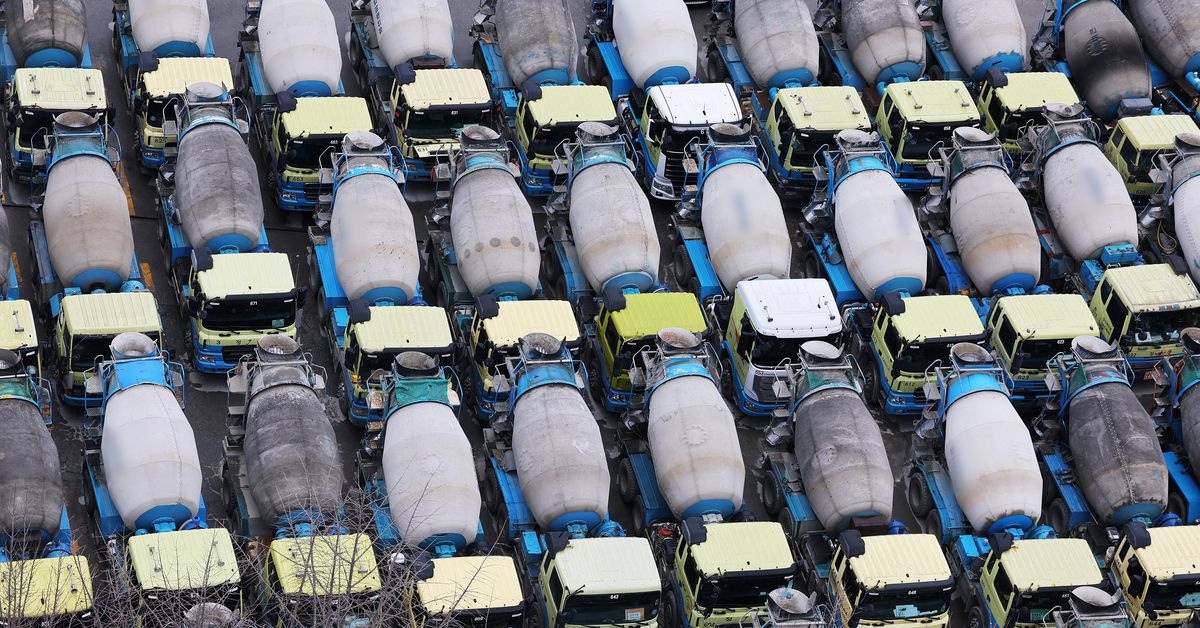 SEOUL, Nov 29 (Reuters) – South Korea ordered about 2,500 striking truckers in the cement industry to return to work on Tuesday, an unprecedented step that invokes tough strike-busting laws as construction sites run out of building materials nationwide.

The second strike in less than six months over minimum pay is causing daily losses of an estimated 300 billion won ($224 million) and disrupting industrial activity in Asia’s fourth-largest economy, which expects growth to slump next year.

“Please return to your positions before it’s too late,” President Yoon Suk-yeol said during a cabinet meeting. “I will firmly establish the rule of law between labour and management during my term and will never compromise with illegality.”

As the strike enters its sixth day, concrete-laying has halted at 508 building sites, or about half of all such sites, as supplies grow scarce, the government said.

The cement industry estimates a cumulative output loss of about 64 billion won ($47.81 million) as of Monday, said the Korea Cement Association, a lobbying group.

About 1,000 of roughly 2,500 bulk cement trailers are unionised, it said, but the industry had shipped just a tenth of the usual daily shipments needed for the peak season from September to early December. Some non-union truckers also halted transport, it added.

Thousands of other truckers who are not in the cement industry are also on strike.

In an exclusive interview with Reuters, Yoon said his government’s tough response to strikes this year is starting to establish the rule of law in industrial relations.

That will help eliminate the risk of unfair labour practices, he told Tesla Chief Executive Elon Musk in a video call last week.

Yoon administration is the first in the country’s history to issue an order forcing striking transport workers back to their jobs.

Failure to comply can lead to punishments such as cancellation of licences and three years in jail or a fine of up to 30 million won ($22,550).

Strike organiser Cargo Truckers Solidarity Union (CTSU) called the start-work order a “undemocratic and violent”, and evidence of the government’s unwillingness to engage in dialogue. Union officials also warned of further disruptions to supplies of fuel and groceries.

“The start-work order is equivalent to martial law for cargo workers. No, it’s an order to die,” it said.

The union held 16 rallies nationwide on Tuesday. During a head-shaving protest at transport hub Uiwang, union leader Lee Bong-ju told hundreds of strikers that they will defy the start-work order and take legal action with the help of certified labour attorneys.

Lee Kwang-jae, head of the Seoul metropolitan branch of the union, told Reuters after shaving his head that about 2,000 truckers had joined the union since the previous June strike as they struggled with their livelihood over fuel costs.

He expressed frustration over the inaction of politicians, including the main opposition party, which holds a parliamentary majority.

Some 76 teams of government officials began conducting on-site investigations with police to order to 2,500 cement transport workers to return to work.

About 9,600 people rallied during the first day of the strike, and the union said about 25,000 drivers are estimated to be striking, including many who are not in the cement industry.

If the cement transport workers do not comply, the government can suspend their transport licenses for 30 days.

And if they still do not, licenses can be revoked, and the government can seek prosecution for potential jail time or fines, a transport ministry official told Reuters.

The government is unwilling to expand a minimum pay system beyond a further three years, while the union says it should be permanent and wider in scope. Negotiations will resume on Wednesday but union officials say the gap is still too wide to reach a compromise.