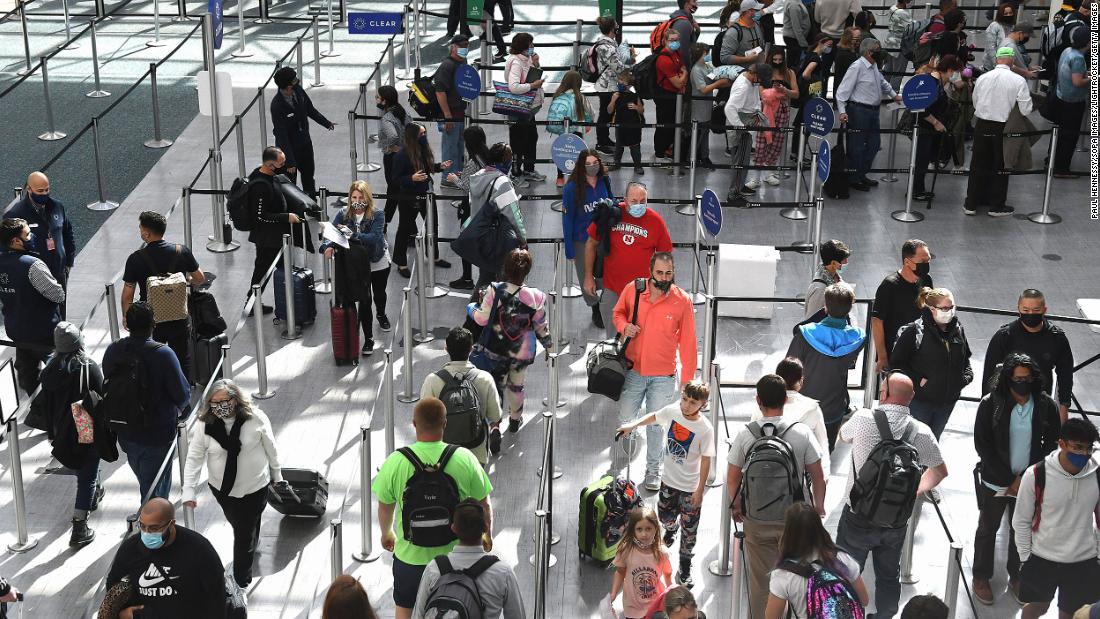 (CNN) — Travel over Thanksgiving is expected to reach nearly 98% of pre-pandemic volume, according to automotive and travel club AAA.

With 54.6 million people expected to travel over the holiday period — a 1.5% increase from 2021, this Thanksgiving is expected to be the third busiest since AAA started tracking travel volume in 2000. (The number peaked in 2005 and was second-highest right before the pandemic in 2019.)

“It seems counterintuitive given inflation and higher gas prices. But given how separated and isolated we were during the first 2 years of the pandemic — and with travel restrictions now lifted — travel demand is high,” AAA spokesperson Aixa Diaz told CNN via email.

“They’re cutting back in other areas of their life — dining out at less expensive restaurants or shopping less — and changing daily driving by condensing errands to preserve gas,” Diaz said.

“But AAA hasn’t seen a desire to pull back on leisure travel. In fact, quite the opposite!”

The number of Americans expected to travel by air is up nearly 8% over 2021. The 4.5 million Americans flying over the holiday period, the five-day period from Wednesday, November 23, Sunday, November 27, is nearly 99% of the 2019 volume.

“Airport parking spaces fill up fast, so reserve a spot ahead of time and arrive early,” Paula Twidale, AAA’s senior vice president of travel, said in a statement. “Anticipate long TSA lines. If possible, avoid checking a bag to allow for more flexibility if flights are delayed or you need to reschedule.”

And while pretty much everything feels more expensive these days, airfare is actually leveling off, according to Scott Keyes, founder of Scott’s Cheap Flights.

Airfare “bottomed out” for about two years from about March 2020 to March 2022, Keyes said. Then it “really zoomed up” in the spring.

“Since then, it’s kind of fallen back down to Earth and now, if you squint, it looks essentially normal. It looks like it did pre-pandemic,” Keyes said.

That’s not to say it’s not more expensive than last year. “Even adjusting for inflation, air fare today is 34% higher than it was 12 months ago,” said Keyes.

With demand as high as it is this holiday season, many air travelers are bracing for disruptions after cancellations and delays plagued the summer season.

Airlines have “gone above and beyond to try to get ready,” Nick Calio, president and CEO of industry group Airlines for America, told CNN’s Pete Muntean.

“They’ve adjusted their schedules, they’ve been on hiring binges, on putting people in the right places that we hope will be at the right time,” he said.

“I’m worried about the weather. I always worry about the weather because that’s the number one thing that can ruin a flight or a flight pattern, but again I think we’re flexible enough now that if there are cancellations or delays we will be ready to try to get people to where they want to go.”

Most travelers will drive

Most travelers will drive to their destinations — as has historically been the case. This year, nearly 49 million people are expected to travel by car. That’s 2.5% below 2019 levels, but up by 0.4% from last year. AAA’s forecast looks at trips that are 50 miles or more from home.

Highways are expected to be busy, particularly in major metro areas. Mobility insight firm INRIX suggests traveling early in the morning on Wednesday or before 11 a.m. on Thanksgiving Day to avoid the most hectic times heading into the holiday weekend. And try to avoid Friday, Saturday and Sunday between 4 p.m. and 8 p.m.

Travel by other modes of transportation is approaching pre-pandemic levels, too.

More than 1.4 million travelers are expected to travel by bus, train or cruise ship during the Thanksgiving holiday — 96% of the 2019 volume.