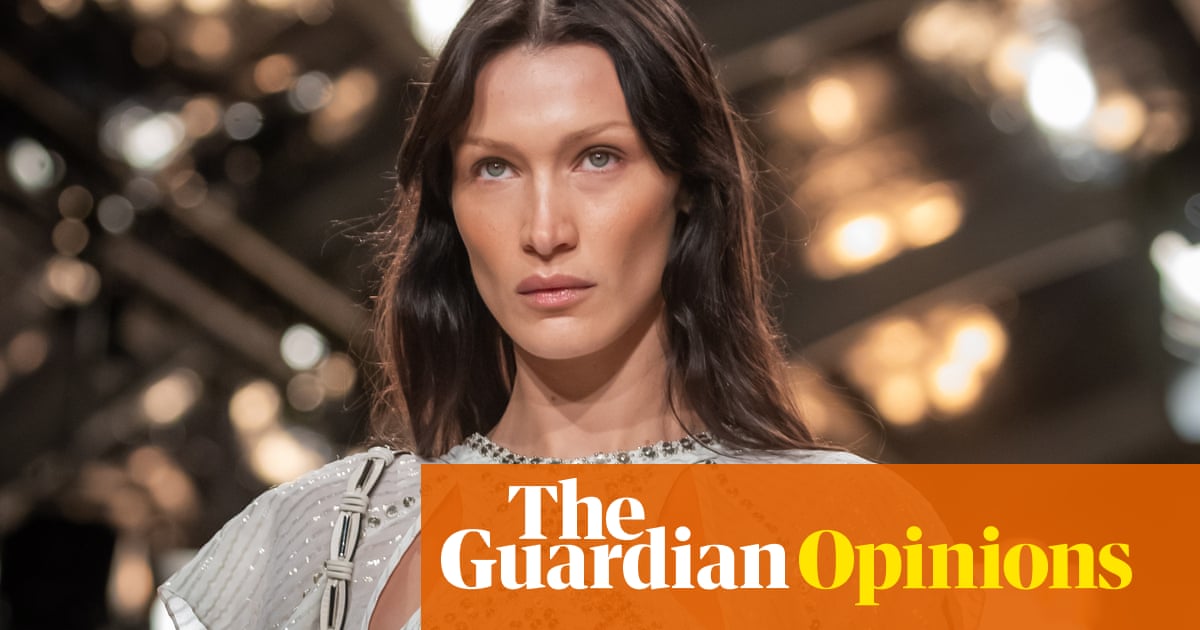 In 2016, I wrote a feature about how eyebrows were “the beauty obsession of the decade”. Six years on, we’re in a new decade but the obsession continues – it’s just the shape that has changed. Back in the mid-2010s, Cara Delevingne was the undisputed queen of eyebrows, with her “big brow” the gold standard. In 2022, tweezers are back – and so is the skinny eyebrow, last seen in Gen Z’s favourite Y2K era.

The first death knell of the big brow came back in 2018, when Rihanna appeared on the cover of British Vogue with eyebrows worthy of the original skinny-eyebrow icon, Marlene Dietrich. More recently, Bella Hadid, Alexa Demie and Kendall Jenner have joined team skinny brow – inspired by Y2K references like Lil’ Kim, Pamela Anderson and Gwen Stefani. Jenner experimented with “bleached” brows for the Met Gala red carpet, and her sister Kim Kardashian had platinum eyebrows (compared to Chloe Sevigny in 1997’s Gummo) for the cover of Interview magazine this month.

Julia Fox and Doja Cat, meanwhile, are known for “no brows” – they have bleached or shaved theirs off respectively. Doja Cat made the change in August – shaving her head at the same time – and has since shared selfies featuring “eyebrows” painted in bright colours and patterns.

Forget any lip service to the natural look, this is a Club Kid-worthy take on eyebrows. Vogue calls them “subversive brows”. Sam Visser, Hadid’s favourite makeup artist, told the magazine: “People are doing their brows now not from the angle of ‘I look better this way’, but ‘this is a cool way to look’.”

In TikTok tutorials – the background noise to any Gen Z pre-gaming – this idea is only emphasised. Glitter brows and faux bleach brows are just two of the looks currently popular, and a filter on the app allows you to try on skinny brows. Glitter brows have even gone beyond the app – in Netflix’s new high-school movie, Do Revenge, Maya Hawke sports them for an end-of-year party.

This Club Kid brow chimes with me. I once – long ago – had the makings of caterpillar-like brows, but plucked them to oblivion as a teenager, with the aim of an Anderson-style skinny brow. I drew them in with a black Collection 2000 eyeliner whenever I went out (most nights of the week). I became so dependent on the increasingly blunt kohl pencil that when I once went out “without my eyebrows on”, to do my job flyering for a club on a Friday night, I was mortified.

Since the mid-noughties, I have retired the eyeliner and painstakingly – via RevitaBrow growth serum, castor oil and patience – tried to grow my brows back. I used to do a monthly tint but this, like a lot of habits, fell away during lockdown, and before that I did microblading, which uses pigment to create a kind of non-permanent brow tattoo. I have now decided on an ombre treatment, which lasts around two years. A bit like microblading, but more understated, I’m hoping it will give me the brows of my dreams: soft, straight, natural and full, all at once. Think Zendaya – she dominates my folder of brow-spiration.

But, with the skinny brow back, I now wonder if I will look semi-permanently unfashionable? Jacqueline Kilikita, the senior beauty editor at Refinery29, reassures me. She says there’s more of an “anything goes” take on brows, with bushy brows and straight brows also popular. “We’re letting our brows do their thing naturally, whatever their shape,” she says. “Individuality is key.” Jared Bailey, the excellently titled global brow expert for Benefit cosmetics, also argues brows aren’t going back to my eyeliner days. “The thin brows we see today aren’t exact replicas of the thin brows we saw in the 90s on Drew Barrymore or Kate Moss,” he says. “Today’s thin brow is more modern.”

Princess Julia, a DJ and model, is a good person to ask about the Club Kid brow. She has done the no brow look since the noughties. “Me and [80s club promoter] Susanne Bartsch, we really enjoy not having eyebrows,” she says. “Because, if you like doing eye makeup, having no eyebrows gets you more space.” There’s also the alien-like effect, made so famous by David Bowie as Ziggy Stardust. “It can transform you into almost like an otherworldly type of look,” says Julia. “Obviously I adore that.”

Julia jests that there are wider reasons behind the death of the Big Brow – “I wonder if it’s a social thing … in times of austerity eyebrows go missing” – but she may be on to something. Beyond the Y2K era, skinny brows have indeed previously been fashionable in times of austerity – in the 30s with Dietrich and Jean Harlow, and in the 70s with Twiggy and Diana Ross. They do certainly have an “against all odds” glamour, which suits 2022, especially if you add the pandemic factor. Post-lockdown, experimentation in makeup boomed. After a year or so inside without so much as a lick of mascara, we wanted to go OTT.

Isamaya Ffrench, the makeup artist who worked on Rihanna’s Vogue cover, says brows become such a site of debate because they are central to how we communicate. “Brows are the most important element [of the face], key to expressiveness. So when you change them, it fundamentally changes the structure of your face.”

Julia, now known for her no brow look, has experienced this first-hand: “If people are used to seeing you without eyebrows, they don’t really think it’s that odd until they suddenly see you with an eyebrow.” I only hope I don’t get a similar reaction after my ombre appointment. I’ll leave the Club Kid brow to braver souls. The aim for me is to look just a little better, like you do after a holiday, rather than raise any eyebrows.